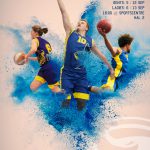 Each year at the end of May, GUMIT takes place. GUMIT is an international tournament organized by two student basketball associations in Groningen. For me it’s my third year in a row to participate at GUMIT and every year I’m wondering if it will be as fun as the previous year. Well, it is!

On Friday night, the 9th of March, after a busy week at the university we, 5 players (Rens, Djordje, Glenn, Bob and Florian) of gents 3 and Kwa from the recreationals, came together at the sports center. Klaas wasn’t there tonight, so the injured Stijn would be coaching us. After a little stress about the shirts (we didn’t know who had them) we drove to Nijverdal. Read more.

The ladies played last Friday against Kikkers from Borne. The warming-up was a little bit different than normal. It started in sportzaal 2 and after 21:00 everything needed to be prepared in sporthal 2. After that the ladies started their game against the number 4 of the competition. And they are number 4 for a reason. Read more.

The first quarter started somewhat slow, but quite surely the lay-ups started to hit and the shots started to fall. Gents 3 had already faced Amical 3 earlier, but in the first quarter the lead already started to build faster than the match before. In the second quarter the Arriba defense tightened further and with good results. Many Amical passes were intercepted and before they knew it, the fast breaks of Gents 3 hit their basket again and again.  Read more.

Check out why you should join us on the 11th of March!! Read more.

Last Saturday, gents 3 went on a journey all the way to the north of Enschede to play The Jugglers. The previous match against this team resulted in a loss, so they knew it wasn’t going to be an easy game.

In the first quarter, both teams started off with a few quick points and the score was even when the first 5 minutes of Q1 were over. Read more.

With six people and three cars (and someone going by bike), gents 3 was going to their first match after the holiday. Last time Arriba defeated the Buzzards with a 13-point difference, but they would still have to work hard this game, especially since coach Klaas had other business to attend to. Luckily for Arriba, veteran Gerben was there to help them out. Read more.